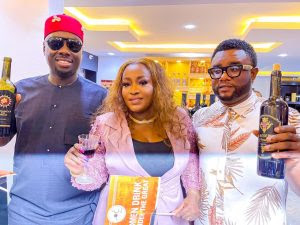 The Chairman, Cubana Group, doubled as CEO Sageitude Limited, Obi Cubana has stormed the ancient city of Ibadan where he launched his “premium range of Sageitude wines” which is to include La Reserva Premium, Alexander the Great and Varna Red wines in Ibadan.
The drinks, were launched at the Optimum’s Drinks as the sole distributor on Saturday, 9th October, 2021.
The facilitator, the CEO of Beedel Construction, MR Bukola Odeleye has expressed his happiness about the success and huge feat achieved.

Mrs. Adeniyi Adeola, the CEO of Optimum Drinks, expressed her optimism about the coming deals to be expecting from the Cubana Groups and how fulfilling it is to be the sole distributor of the magnitude drinks in Ibadan.
The Chairman of the Cubana Groups, Obi Cubana also visited major bars and clubs and hotspots in Ibadan after the launching, such as Mauve 21, Cruzer Club, Switch Club amongst others.