In other news, a Ghanaian young man named Samuel Terkper has moved remarkably from a school drop out to become a CEO of an engineering company which takes massive orders from several companies and individuals in and around Accra.
Terkper Samuel the CEO of Don-Leaky Engineering Services (DLES) which currently has three different branches was born to Rebecca Terkper and Daniel Terkper who passed in 2005.
He entered the Institute of Chartered Accountants after finishing SHS but realised that his strength was not in education and decided to drop out to start something on his own.
“I dropped out to search for what God has given to me”, Samuel indicated. 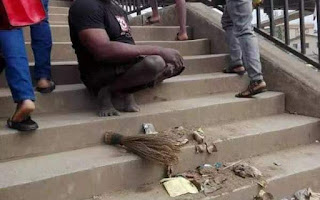 Narrating how he found his path as a refrigeration engineer, the young CEO revealed that it was through a series of dreams.
He said: “I usually dreamt and saw myself on buildings using the tools [like someone fixing air conditioners.”
It appears as though the young CEO’s path was purely directed by God as he narrated that he sometimes hears visible voices instructing him on how to fix the parts and solve some of the engineering problems, especially when he started out fresh.
No one dares call me a beggar – physically challenged man says