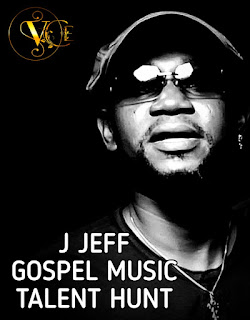 Giving back to his roots, the President of Vision Of Christ Entertainment (VCE), Jeffery L. Omo-Omorogie, massively addressed as J. Jeff, has thrown open the doors of his company for musically gifted young acts to actualized their dreams.

The CEO whose debut album, I AM MOVING ON which came out late last year, taking his deserved space fast as a result of the input of celebrated acts like Orits Wiliki, Righteousman,Carol Cee and other big time players on the music scene who featured in the album. With this kind gesture, J. Jeff who had been at the background Recording and doing collabos with some top acts is no doubt poised to give a blank cheque which would eventually pull them up along the line in their career.The J.Jeff Gospel Music talent hunt, a unit of VISION OF CHRIST ENTERTAINMENT PROJECT is packaged to change the game of gospel music making.The overall winner of this contest and other lucky ones according to J. Jeff will be signed onto the VCE label.This will be done in concert with some great icons at the grand finale, where all will do a collabo. To make the epoch making efforts in view thick, VCE will be working with the CEO of Bigtown International and Reggae power house, Righteousman who will manage and produce the project in view.Tell a friend to tell another that J.Jeff Gospel Music Talent Hunt is a Sure Deal and a Big Reality.To Participate:Solo artiste / ChoirFollow @visionofchristentertainment on InstagramLeave your WhatsApp number and Names.The next step to take to your dream come through will be sent to you on WhatsApp.FOLLOW NOW!!!