Ibadan Poly Burned Down All Phones Seized During Exams 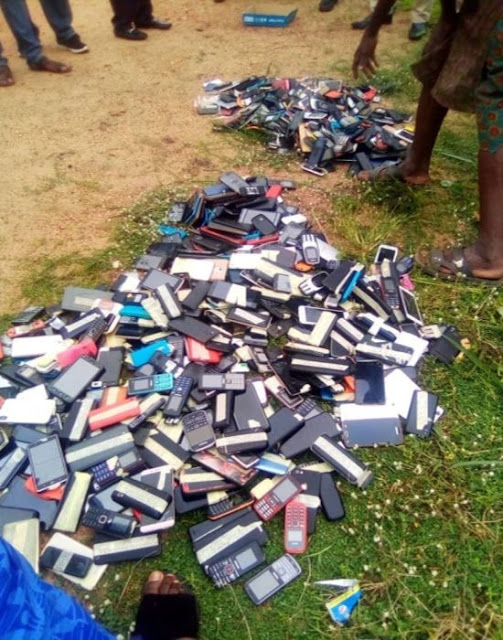 To restate its commitment to fighting examination malpractices to the barest level and enforcing discipline, the management of The Polytechnic Ibadan has ordered that mobile phones, worth millions of naira, which were confiscated from the students during examinations be set on fire.
The Deputy Rector of the institution, Bayo Oyeleke, addressing journalists on Wednesday, at the Ibadan campus of the institution said the authorities have resolved to ensuring that the examinations of the Polytechnic are sacred.
According to Oyeleke, the phones worth millions of naira were recovered from the students during examination in the school and that the school has decided to burn the phones to restate its commitment to fight examination malpractices to the barest level.

“We are here to take further action on our resolved to ensure that the crop of students and product being produced by the school are students with exemplary character and are those who really work and worth the certificate of the institution.”

He said.
He further said there are rules guiding the school examination and that any student that goes against any of the rules will be made to dance to the music.

“There are rules guiding the principles of our examinations and one of it is that no student under whatever guise should come into the examination hall with cell phones but you know that some students are very recalcitrant
“We have resolved to confiscate them because it has been expressly stated on their examination paper that any phone found on any students during examination shall be confiscated and in order not to allow any of the phones to filter out, the school has resolved that such phones shall be burnt,”