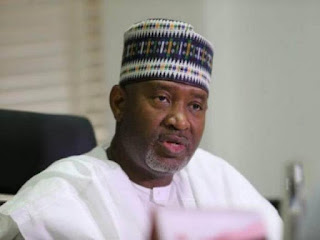 At the centre of the recent frosty diplomatic row between Nigeria and the United Arab Emirates (UAE) is Nigeria’s Aviation Minister,  Hadi Sirika’s desire to become Katsina State governor in the 2023 elections Pointblanknews.com has been uncovered.

Pointblanknews.com investigations reveal that the real reason for the escalation of  diplomatic row is the desire of the Aviation Minister, Hadi Sirika to replace Emirates Airlines with Qatar Airways to takeover the routes hitherto operated by the former.By intensifying the diplomatic wrangle, the Minister is believed to be setting the stage to negotiate juicy deals that will swell his accounts and fund his plans, it was gathered.It could be recalled that the Middle East country had earlier denied the Nigerian flag carrier airline, Air Peace, from operating to Sharjah, near Dubai.The Nigerian authorities responded through the Nigerian Civil Aviation Authority to limit Emirates’ flights to once weekly.However, sources privy to the ongoing revealed that prior to the aviation crisis, Sirika has allegedly been demanding for kickbacks that help in building a financial war chest to prosecute the 2023 gubernatorial election in Katsina State.“The Minister is driven by the desire to succeed Governor Masari of Katsina at the end of his term and therefore wants to stockpile funds ahead, using any means necessary.“He used this avenue to punish Emirates Airlines for not cooperating and wants to replace it with the Qatari players. Of course, he has business concerns and associates there, so what more way than to cement an already existing relationship.” The source revealed.Another source within the foreign affairs circles also revealed that UAE is now withholding a 9 Billion investment deal which was agreed to during President Muhammadu Buhari’s visit to Middle East country earlier in his term.“Because of the Minister’s meddlesomeness, this investment deal that would have had significant impact in our nation’s economy has been halted.“All these on the alter of a crooked ambition and desire to illegally extort funds using privileged position for personal aggrandizement. This is sad” the source concluded.